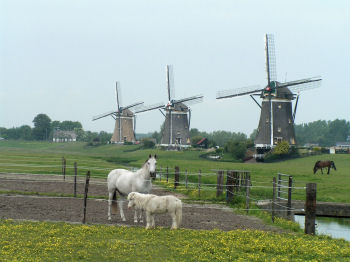 You definitely will know that there are a large number of windmills in Holland. Many of them already have been destroyed. But do you know why these windmills exist?

I must recollect that Holland is at the edge of land and water. Half of the country is below sea level. The Dutch always have been struggling with the sea. Sometimes they won, sometimes they lost. In the 15th and 16th century we lost a lot. The west part of the country was threatened more and more by the sea.  But under water there was very fertile soil, consisting of fine sea clay and lots of chalk. Dutch engineers designed the concept of a "polder". A polder a low level dry area. First, you need a dike, locking up the entire area. Outside the dike, there must be a canal, called "boezemwater" around the dike. The third thing you need is a pump. The pump pumps the water out of the polder in the "boezemwater". Because Holland is flat and near the sea, there always is wind. This gives the solution to obtain the energy to drive the pump: wind. There we have the famous Dutch windmills. Of course for a large area a large number of windmills are needed. So, often if you see one you can see 3 or 4 like in the picture above.

An extreme sample you can see in "Kinderdijk" a small village in South Holland. Her you can see 19 windmills in a very close area. This gives a magnificent impression on what it looks like.

In the 19th century the steam engine was invented. Many windmills were replaced the by pumps with a much larger capacity and less work in maintenance and operations. Such pump stations we call "gemaal" in Dutch.

In the 20th century they were replaces by engines running on oil, natural gaz or electricity. Some of the steam engines are preserved.

You can find a small museum with an old diesel gemaal in Haastrecht, a smell town near Gouda.  A very large steam gemaal is a museum as well, it's called museumgemaal Cruquius. Cruquius is a museum now, where you can get a guided tour and they will show how it works, though unfortunately the steam engines are no longer operational. There are some others as well, search in Google for the word "museum stoomgemaal" and you will find some of them.

Near Medemblik you find a steam engine museum, which has a working stoomgemaal:

One more thing should be mentioned. Jan Adriaansz Leeghwater, a man tightly connected to polders and windmills. On Wikipedia you can find a biography in English. I recommend reading this article.

Next
Category: About Holland